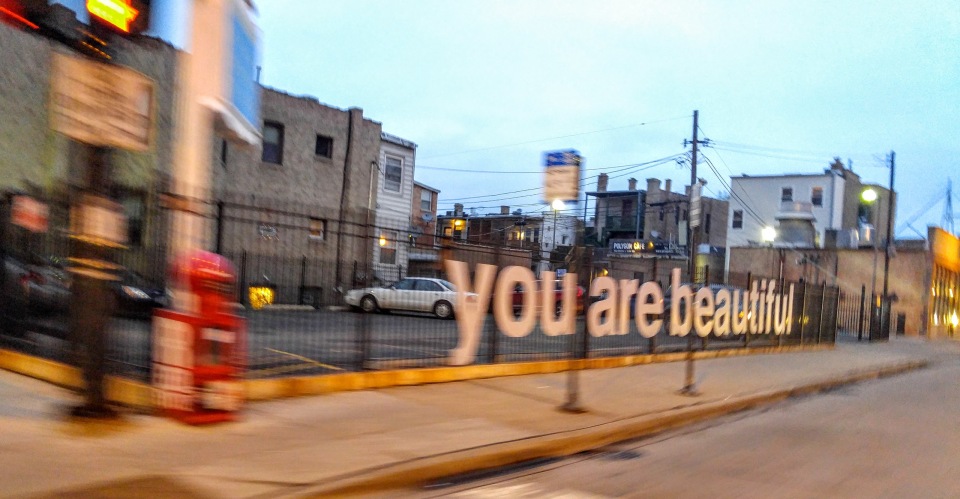 I love seeing these signs around Chicago…I snapped this photo from the car back in March when visiting my cousin in Andersonville…Link to the full article about the artist who began the uplifting and inspiring movement of positivity below.

It’s an uplifting message spotted on a sticker at a downtown bus stop, on a billboard at a school in Andersonville, on a mural in Chinatown or on a fence in Englewood. Throughout Chicago, there are a dozen big public installations where the beautiful message can be found, and more are coming, including one to a playground in Roscoe Village.

“I landed on that phrase just because I believe that it’s true no matter what,” said artist Matthew Hoffman, the founder and custodian of the You Are Beautiful project, which started with stickers in 2002 in Chicago.

Why being ‘mischievously positive’ has caught on
Hoffman’s work also has an element of surprise. “I say a lot of times be mischievously positive because it’s fun to make these big things you know people are going to drive by and it’s going to freak them out for a little minute or totally change their mindset for half a second,” he said.

His spirit was contagious and caught the attention of the Chicago Community Trust, which worked with Hoffman to craft the “What You Do Matters” campaign for their centennial year celebrating philanthropy, said Eva Penar, the trust’s marketing and communications director. Hoffman designed the logo, and it appeared on buttons, tote bags and T-shirts.

“We wanted to stress that it isn’t just the million-dollar donations, but also the clothing drives, the soup kitchens, shoveling snow from your neighbor’s driveway, mentoring kids and reading [to] the elderly—what you do matters,” Penar said.

Category : A-Z Miscellaneous, About Me, All Posts, Captured Moments

← “A wonderful thing about true laughter is that it just destroys any kind of system of dividing people.” ~John Cleese
“You should always be taking pictures, if not with a camera then with your mind. Memories you capture on purpose are… →

12 thoughts on “You are beautiful”